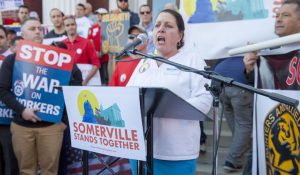 A new movement has sprung to life in Somerville, driven by a coalition of residents who say they don’t like the direction the city’s headed and point to high housing costs, low wages, and unfair development deals.

Somerville Stands Together (SST)—a group of around two dozen lead organizers and a few hundred affiliate members—hopes to spark action at the municipal level, putting pressure on the board of aldermen and the mayor.

The current real estate trends are not sustainable, but neither are they new, organizers say. By harnessing what they call long-simmering frustrations, SST is hoping to continue drawing residents into the fold.

The movement also calls for more union jobs, and while many unions have signed onto the cause, so have residents who’ve never been politically active, like Marianne Walles.

Walles, 50, says it’s not right that families who’ve lived in Somerville for generations, and expected to stay for generations to come, are getting priced out.

“[The city] was close knit. It was generation after generation of families. It was an affordable place to live,” she says. “It really felt like a small town, versus a large city.”

Walles’s parents raised her in the Winter Hill neighborhood, where she still lives after raising her family there. But her two children, now in their 20s, likely can’t afford to live locally once they move out, she says.

Penelope Jennewein, 26, is part of the generation facing tenuous prospects for affordable living in Somerville. Attracted to the city’s progressive values, specifically that Mayor Joseph A. Curtatone put up a Black Lives Matter banner on City Hall, Jennewein moved to Somerville two years ago.

“Even in the two years, it’s just amazing the amount of buildings that are being flipped and for sale signs and condos,” she says. “I moved out of a house I was living in, the owner sold it and it turned into condos.”

While Walles worries the constant turnover means losing a sense of community, Jennewein’s concerned about the loss of diversity in a city known for its artists and immigrants.

“The rapid transformation of this city that only the very wealthy can afford to live in—I just feel dismay to see what’s happening here,” Jennewein says.

At the start of this year, the conversations that had been happening between neighbors about the city’s future started to take on a more formalized tone, she says.

On April 26, around 400 residents, union members, local workers, and community groups marched from Union Square to City Hall, carrying banners that read “Up with Wages, Down with Rent,” and “Solidarity.” The march and rally were SST’s first public action, and officially launched the coalition.

SST’s platform argues not only that the city needs more affordable housing units, but also that new construction should use union labor and that city employee contracts should be fair, with living wages. Additionally, labor laws should be updated and workers should be able to organize unions at any business receiving a tax break from the city, SST insists.

“We are working hard to fix Somerville’s broken policy on condo conversions, to regulate short-term rentals like Airbnb, and to insist that developers like the ones down in Union Square sit down and directly negotiate a binding Community Benefits Agreements with the people who live here, to address issues like displacement, fair pay, and protecting our existing small businesses,” he told Scout in an email.

The Board of Aldermen does not have a role in negotiating city employee contracts; however, Ewen-Campen calls the absence of new contracts “outrageous.”

“These are the people who make our city run, from the school nurses to DPW workers,” he writes. “I’m with the workers all the way—it’s long past time for a fair contract that guarantees decent pay.”

The mayor’s office says the administration is negotiating these contracts in “good faith.”

“We want to see the hardworking union employees of the city be fairly compensated under a new contract, and soon,” says Jackie Rossetti, deputy director of communications for the City of Somerville.

SST’s strategy has involved attending board of aldermen meetings and weighing in during public comment periods on proposed developments.

The group has a friendly audience in the Board of Aldermen, says Ward 5 Alderman Mark Niedergang.

“In his 2018 Inaugural Address, Mayor Curtatone laid out a 10-point plan around affordable housing, and we have already made significant progress in many of those areas including the passage of a Transfer Fee that is currently being reviewed by state legislators and the creation of an Office of Housing Sustainability,” his office said in a statement. “New ideas are always welcome, and for anyone who wants to roll up their sleeves and work with us, the door is always open.”

The Transfer Fee puts a one percent tax on the seller and buyer of all real estate, providing a new pool of money to be used for affordable housing. Owner-occupants would be exempt. The Board of Aldermen voted unanimously to approve the new fee.

This spring, the Board of Aldermen spent a significant portion of its time discussing the redevelopment of Somerville Housing Authority’s Clarendon Hills, a project that would provide new market-rate units in addition to refurbished affordable units.

SST argues the private developer, Redgate Residential, should be forced to use only union labor and that private labor contracts lower wages and safety standards.

“Storming” meetings this spring with dozens of SST members, and testifying, pushed the needle on the issue, says Jennewein.

“The aldermen started asking serious questions, actually telling the developer [of Clarendon Hills] that they need to go back and negotiate with unions … SST has been a big reason for that,” she says.

SST members also wrote letters to the board of aldermen, demanding that they hold Redgate more accountable.

“The Board of Alderpersons must stop this downward spiral veiled as affordable housing, and demand that Redgate conform to our community standards, including fair pay for all workers,” wrote David Santana, a Somerville resident, construction worker, and member of the Metro Building Trades Council.

Board of Aldermen President Katjana Ballantyne emphasized that the board’s role is to facilitate discussion between unions and developers, but that ultimately they negotiate directly with one another.

“However, I have done everything as board president to allow this discussion to happen, by hosting a Labor Forum in January 2018 so union groups and the developer team could speak directly with one another,” she told Scout in an email. “I’ve arranged, facilitated and rescheduled Aldermen committee and regular meetings to ensure the Building Trades and developer teams could have time to converse and negotiate.”

The Mayor’s Office also notes “that while it is understandable that community members would request that the city require union labor of developers, it is not legal for the city to do so.”

At a May 31 vote, the Board of Aldermen approved Redgate’s proposal, which included agreeing to pay a minimum of $20 an hour for all labor and setting aside $2 million more for union contracts, which would make up 35 percent of the project, says Niedergang.

The board wanted more concessions from Redgate, but “because the housing was in such terrible shape, we ultimately voted for this because it was the only way to get it done given the shortage of public funds that are available for public housing redevelopment,” says Niedergang.

SST’s presence at the meetings “certainly had an impact,” he says.

“It’s a way of showing that there is broad public concern and broad public support for union issues in the city,” he adds.

Marianne Walles says that knowing the details of what developers are getting out of each deal matters.

As a social worker, Walles has plenty of experience talking to people about their housing concerns, but she’d never been part of an activist group until joining SST. Learning about the specifics, she’s become more passionate, she says, a transformation she hopes other residents will also experience.

Informed residents have more agency and a “seat at the table,” says Walles.

“Somerville Stands Together has forced the city and the officials to be more transparent, which makes residents have that second thought: ‘these are issues I need to pay more attention to,’” she adds.

Involved residents can make demands, like calling for bigger affordable units, she says.

“The meetings are intergenerational, with men and women in the room. There’s a social worker in the room, an iron worker, there’s me, all kinds of people,” says Jennewein, who works as a union organizer for Service Employees International Union as her day job.

Having diverse buy-in on the group’s objectives is crucial in building the movement, she says.

“There has been a lot of division in the past, pitting long-term residents versus the newer residents,” says Jennewein. “Many of the newer folks who are coming in agree that they want the Somerville that they’d heard of—[one that’s] diverse and has artists and crossing guards living on the same street. I think some of that kind of narrative of long-term residents versus newer residents is just a narrative,” she adds.

Before SST was formed, neighbors would gripe amongst themselves, “but there was no form or structure or groups to turn to,” she says.

“And SST gives that forum for people to come together—that’s the heart of it—giving the residents a forum,” she says. 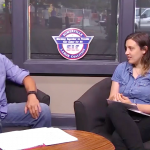